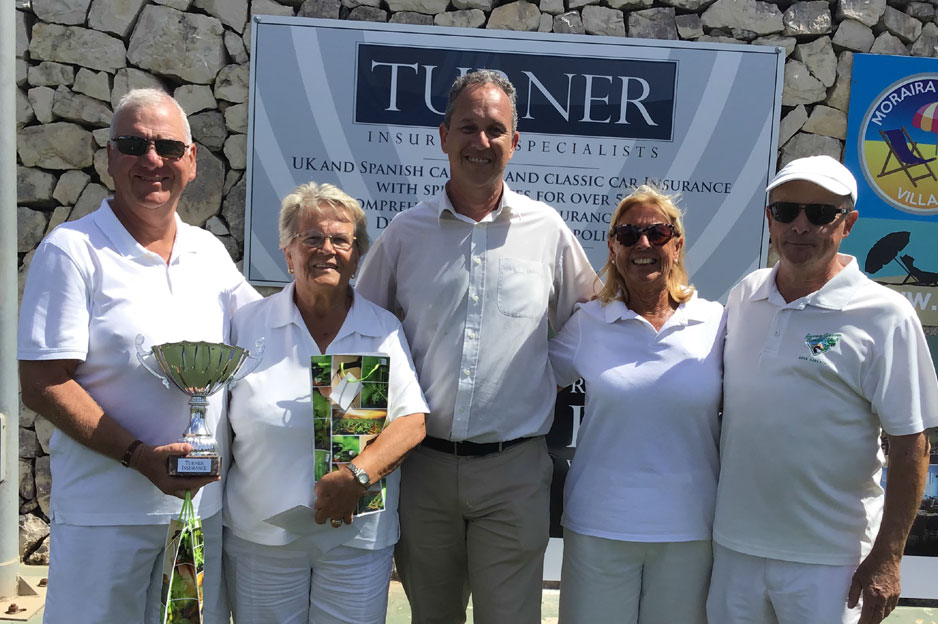 It was a pleasure for Turner Insurance Specialists to sponsor the May competition at the Javea Green Bowls Club. The sun was shining for 48 of the Javea Green members to compete in what was a terrific day for everyone involved.

Hot Off The Press

Read below to find out more about the fantastic day we had from the latest press release. Congratulations to the winners and to everyone that took part in the competition. Also, thank you to everyone that helped organise the day and make it so enjoyable for everybody. We will be back soon.

Another successful competition was enjoyed by 48 Javea Green Members, with Ritva McAuliffe and David Bell coming out on top and being crowned as Champions.

The Round Robin stages saw the top teams in each of the 4 groups qualify for the semi-finals. The first match saw June Herrera and Alan Phillips tie the 8 end match 7-7 with Ritva and David, but the latter won the sudden death decider and progressed to the final.

The other semi-final was also a close affair with Maureen Barrie and Dave Carvath holding off the challenge from Angela Sankey and Jenny Rich to win 11-7.

The final was keenly contested, but with Ritva and David continuing the fine form they had shown throughout the Competition, Maureen and Dave were unable to maintain their challenge.

We were delighted that Andrew Turner was on hand to present the Trophy to our winners and the generous prize money to all of our semi-finalists, runners- up and of course our Champions. Andrew also generously provided a €150 petrol voucher and all of our competitors were given a “free” entry into the draw. The winner was Dave Stobart, who showed his delight with a little jig across the green!

Our Club Captain Jenny Rich, counted her winnings and then thanked our Match Secretary Alan Phillips for providing our Members with another enjoyable competition.